After more than 100 years of scientific exploration, scientists are beginning to find that the gut-brain axis is bidirectional, which means that “the brain acts on gastrointestinal and immune functions that help to shape the gut’s microbial makeup, and gut microbes make neuroactive compounds, including neurotransmitters and metabolites that also act on the brain.” 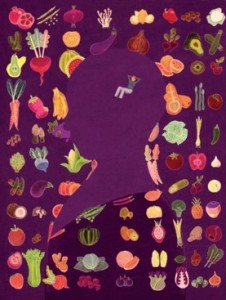 What is the gut-brain axis?

Homeostasis in humans is the body’s natural ability to self-regulate internal conditions, including keeping your body at approximately 98.6 degrees (Fahrenheit). Humans are able to regulate temperature by sweating and shivering.

This communication is regulated at the hormonal, neural, and immunological levels – ultimately meaning that it affects all of your body’s systems. Therefore, it’s understandable that illness in the gut is highly associated with mental illness. There is a high rate of co-occurring symptoms between gastrointestinal disorders and psychiatric disorders. This connection manifests in many ways, including anxiety being linked with irritable bowel syndrome (IBS) and inflammatory bowel disorder (IBD). Interestingly enough, the presence of psychiatric and intestinal disorders is also associated with abnormal microbiota profiles.

One of the ways in which the gut communicates with the brain is via the vagus nerve. Your vagus nerve runs throughout your body, and it “is responsible for the function and regulation of several bodily systems such as the heart and digestive tracts. If the vagus nerve malfunctions these systems can stop functioning properly.” 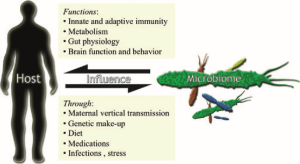 The Microbes (bacteria such as probiotics) in your intestines and your body have a mutually beneficial relationship: your body is the host that fuels the microbes and the microbes play vital roles in bodily functioning. Some of the bodily functions that depend on the health of your microbiome are: the development and maintenance of the immune system, maintaining homeostasis of the intestinal barrier, absorbing essential nutrients, and distributing certain fats.

There are numerous things that can throw off the gut’s microbiome, one of them being antibiotics. To put it simply, antibiotics work by decreasing the amount of bacteria in your body. This is the opposite of what probiotics do, which is increasing the amount of (good) bacteria in your body. Researchers are beginning to find that antibiotics may have more negative than positive consequences. One of the ways the negative consequences of ingesting antibiotics may manifest is in a sudden, dramatic behavior change, usually referred to as ‘antibiotic-induced psychosis.’ Even though antibiotics are ingested and pass through the GI tract, they still have a direct impact on the brain – thereby behavior – via the gut-brain axis. If the reaction to antibiotics is strong and adverse enough within the gut, the result may be an induced psychosis. This is yet another example of how the gut-brain axis directly influences human behavior, making the health of your microbiome an essential facet of your overall health, including that of your mental health. 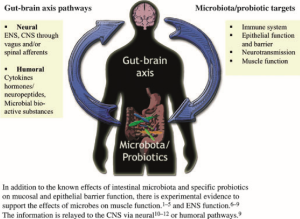 Because of the dramatic dependencies between the gut and the brain, any disturbance in either of these systems will affect the other system, thereby affecting the entire body’s systems and functions.  If something goes wrong in your gut, it will ultimately lead to issues in the brain. Considering your brain is the control-center for your behavior and thoughts, it becomes clear that what goes on in your gut, affects your brain, which consequently affects your behaviors, thoughts, feelings, and actions. The implications of your gut are tremendous – could the wrong bacterial composition in your gut lead to immorality? We don’t know the answer to that question, yet, but researchers are well on their way to uncovering the complex dynamics behind the gut-brain axis. 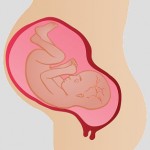 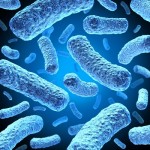 How and When to take Probiotics?